This guide takes as input the application developed in the Getting Started Guide.

The prerequisites vary slightly depending on whether you are using Oracle GraalVM CE/EE or Mandrel.

Skip to this section to continue with the guide for Mandrel,and follow the Mandrel-specific instructions in that section.

Version 21.2.0 is required. Using the community edition is enough.

We recommend that you follow the instructions in the next sections and package the application step by step. However, you can go right to the completed example.

The solution is located in the getting-started directory.

The native executable for our application will contain the application code, required libraries, Java APIs, and a reduced version of a VM. The smaller VM base improves the startup time of the application and produces a minimal disk footprint.

If you have generated the application from the previous tutorial, you can find in the pom.xml the following profile:

We use a profile because, you will see very soon, packaging the native executable takes a few minutes. You couldjust pass -Dquarkus.package.type=native as a property on the command line, however it is better to use a profile asthis allows native image tests to also be run.

Producing a native executable can lead to a few issues, and so it’s also a good idea to run some tests against the application running in the native file.

This instructs the failsafe-maven-plugin to run integration-test and indicates the location of the produced native executable.

Then, open the src/test/java/org/acme/quickstart/NativeGreetingResourceIT.java. It contains:

To see the NativeGreetingResourceIT run against the native executable, use ./mvnw verify -Pnative:

Excluding tests when running as a native executable

If you share your test class between JVM and native executions like we advise above, you can mark certain testswith the @DisabledOnNativeImage annotation in order to only run them on the JVM.

If the process cannot find the native image for some reason, or you want to test a native image that is no longer in thetarget directory you can specify the executable with the -Dnative.image.path= system property.

Quite often one only needs to create a native Linux executable for their Quarkus application (for example in order to run in a containerized environment) and would like to avoidthe trouble of installing the proper GraalVM version in order to accomplish this task (for example, in CI environments it’s common practiceto install as little software as possible).

To this end, Quarkus provides a very convenient way of creating a native Linux executable by leveraging a container runtime such as Docker or podman.The easiest way of accomplishing this task is to execute:

If one of those extensions is present, then creating a container image for the native executable is essentially a matter of executing a single command:

You can run the application in a container using the JAR produced by the Quarkus Maven Plugin.However, in this section we focus on creating a container image using the produced native executable.

The produced executable will be a 64 bit Linux executable, so depending on your operating system it may no longer be runnable.However, it’s not an issue as we are going to copy it to a container.The project generation has provided a Dockerfile.native in the src/main/docker directory with the following content:

Then, if you didn’t delete the generated native executable, you can build the docker image with:

And finally, run it with:

You may want to build the native executable directly in a container without having a final container containing the build tools.That approach is possible with a multi-stage Docker build:

Such a multi-stage build can be achieved as follows:

Save this file in src/main/docker/Dockerfile.multistage as it is not included in the getting started quickstart.

If you are using Gradle in your project, you can use this sample Dockerfile. Save it in src/main/docker/Dockerfile.multistage.

And, finally, run it with:

Using a distroless base image

If you are looking for small container images, the distroless approach reduces the size of the base layer.The idea behind distroless is the usage of a single and minimal base image containing all the requirements, and sometimes even the application itself.

Quarkus provides a distroless base image that you can use in your Dockerfile.You only need to copy your application, and you are done:

Quarkus provides the quay.io/quarkus/quarkus-distroless-image:1.0 image.It contains the required packages to run a native executable and is only 9Mb.Just add your application on top of this image, and you will get a tiny container image.

In certain circumstances, you may want to build the native image in a separate step.For example, in a CI/CD pipeline, you may want to have one step to generate the source that will be used for the native image generation and another step to use these sources to actually build the native executable.For this use case, you can set the quarkus.package.type=native-sources.This will execute the java compilation as if you would have started native compilation (-Pnative), but stops before triggering the actual call to GraalVM’s native-image.

After compilation has finished, you find the build artifact in target/native-sources:

From the output above one can see that, in addition to the produced jar file and the associated lib directory, a text file named native-image.args was created.This file holds all parameters (including the name of the JAR to compile) to pass along to GraalVM’s native-image command.If you have GraalVM installed, you can start the native compilation by executing: 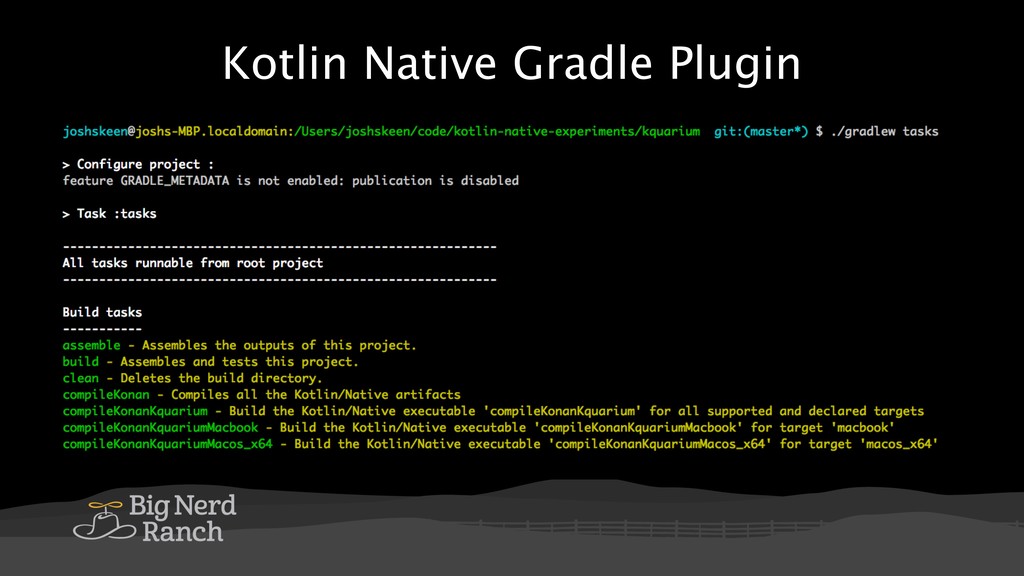 The process for Gradle is analogous.

Running the build process in a container is also possible:

A high level overview of what the various steps of a CI/CD pipeline would look is the following:

Depending on what the final desired output of the CI/CD pipeline is, the generated binary might then be used to create a container image.

Starting with Oracle GraalVM 20.2 or Mandrel 20.1,debug symbols for native executables can be generated for Linux environments(Windows support is still under development, macOS is not supported).These symbols can be used to debug native executables with tools such as gdb.

Aside from debug symbols,setting -Dquarkus.native.debug.enabled=true flag generates a cache of source filesfor any JDK runtime classes, GraalVM classes and application classes resolved during native executable generation.This source cache is useful for native debugging tools,to establish the link between the symbols and matching source code.It provides a convenient way of making just the necessary sources available to the debugger/IDE when debugging a native executable. 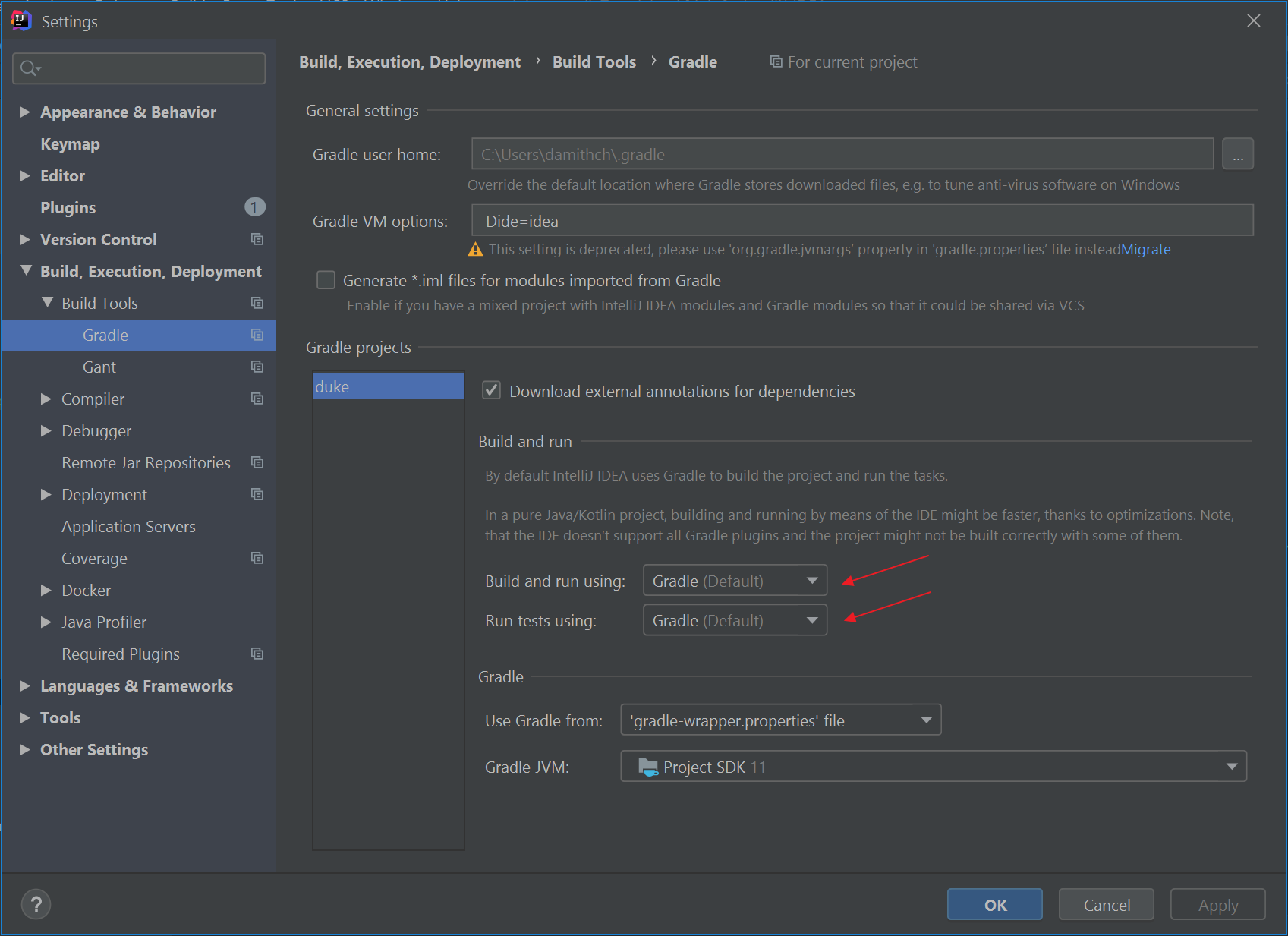 The source cache is located in the target/sources folder.

There are a lot of different configuration options that can affect how the native executable is generated.These are provided in application.properties the same as any other config property.

This guide covered the creation of a native (binary) executable for your application.It provides an application exhibiting a swift startup time and consuming less memory.However, there is much more.

We recommend continuing the journey with the deployment to Kubernetes and OpenShift.

Although we can use IDE for creating new java projects, if we use a build tool like gradle and create the project from ground up then not only we have more control, we can also change between IDEs as we feel the need.

This command create a gradle.build file with the contents

To check all tasks of the project run -

You will see list of tasks available for the project and short description about what the task is about. If you want to run any of the task then just run

where <task name> is the task from the previous command. For example If you run -

then the distribution(compressed executable) file will be found in buld>distributions folder. There is tar and zip archive. You can extract and use either of them.

You can create new custom tasks or add plugin that have prebuilt task that you can use.

Code coverage is one of the most important metric for any project. From Wikipedia -

In computer science, test coverage is a measure used to describe the degree to which the source code of a program is executed when a particular test suite runs. A program with high test coverage, measured as a percentage, has had more of its source code executed during testing which suggests it has a lower chance of containing undetected software bugs compared to a program with low test coverage.

We are going to use JaCoCo1 for test coverage. At first we need to add JaCoCo as dependencies -

now we can create code coverage report by running -

but I want to create code coverage report when I run gradle test command which run all tests for the project. To do so edit your gradle.build file -

Please Note: We can use JaCoCo to generate Code Coverage Report for Continuous Code Quality tools like SonarQube2. I will discuss about it in future articles.